The Parish of North Bute was created in 1835 out of the northern area of the Parish of Rothesay (The High Kirk) and gained full independence in 1844.  The first church building was erected at Croc-an-Raer and was dedicated as St Colmac in 1836, but was correctly known as North Bute Kirk until the union in 1929 when its name was changed to North Bute : St Colmac’s Parish Church.  No longer in use and roofless,  this building still stands within the old North Bute cemetery.

By 1884 the villages of Ardbeg and Port Bannatyne had grown large enough to justify a new church, there being no Church of Scotland kirk nearer than Croc-an-Raer.  St Ninian’s (seen below) was therefore built and was ready for dedication on 25th July 1886.

St Bruoc’s Church was destroyed by fire in 1956 and on the 2nd September 1956 a new united congregation was formed with the union of North Bute (St Colmac’s and St Ninian’s) and Port Bannatyne St Bruoc’s.  The new congregation was called North Bute Parish Church.  When in 1980 St Colmac’s closed, St Ninian’s became the sole church in the north of the island.  It continued to be used as a place of worship by the United Church of Bute until 2007 when it was sold for residential use. 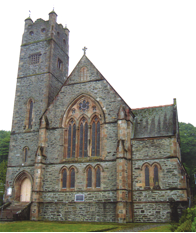 The St Ninian’s Church building was designed by William F McGibbon and completed in 1886.  There is an ‘Early Decorated’ feel to the building, formerly a three bay gothic church, with an offset, 33m high, square bell tower.  The tower is crested in finials and stepping parapets, both dramatic and bold.  A plain but dignified aisled nave church, it has Romanesque columns supporting the pointed arch arcaded aisles, which lend solidity to its height.