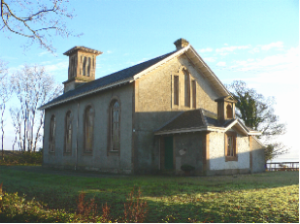 Constructed of traditional stone with a slated roof, the Church building is situated in a very attractive location at Ascog Bay, some 3 miles from Rothesay Town Centre on the A844.  The building is Listed as being of architectural/historic interest (Category B).  The architect, David Hamilton, also designed Hamilton Palace, Royal Exchange Square, and Toward Castle.

The solitary grave in the grounds is that of actor, artist and poet Montague Stanley.