During the 6th century, Christianity reached Bute through St Catan.  His nephew, St Blane, is believed to have been born in the parish and later established a monastery near the south end of the island.  Seven abbots served there until the Vikings destroyed the settlement in about 800 AD.  The remains of this early settlement are still to be seen a little over one mile from Kilchattan Bay.  St Blane’s Chapel which now stands on the site dates back to the 12th century and remained the Parish Church until 1676, when it fell into a poor state of repair.

The first minister of the Reformed Church was appointed to Kingarth in 1572.  After the church of St Blane’s became ruinous, the place of divine worship was as the weather would permit – sometimes on a hillside on a good day, sometimes in a cave at Ardnahoe, sometimes in a barn at Langalchorad, or again at Kilchattan Mill.  A new Kirk seating 250 persons was finished in 1680.  This stood in the middle of the present graveyard at Kingarth and was called Mid Kirk, as it is midway between St Blane’s and Scoulag Kirk (now the Bute Family Mausoleum in the grounds at Mount Stuart).

When the parish became vacant in 1724 a long struggle between the parishioners, the Countess of Bute (on behalf of her son who was the principal heritor) and the Presbytery ensued.  During this period the Mid Kirk became dilapidated and Scoulag Kirk became the place of worship.  The Mid Kirk was brought back into use, but again fell into disrepair and a new church was built in 1826, also in the graveyard, being called Kingarth Parish Church.  In 1843, at the time of the Disruption, the Reverend John Buchanan was Minister at Kingarth and did not ‘come out’, but as a result, some members walked out of Kingarth Parish Church and set up South Kingarth Mission Station at Kilchattan Bay.  The present church was built in 1894/5 as South Kingarth Free Church (becoming Kilchattan Bay U F Church in 1900) and stands on the Mission Station site. 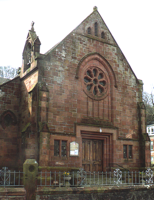 In 1929 the U F Church reunited with the established church.  In 1931 vacancies in both Kingarth and Kilchattan Bay Churches led to a request for uniting the two congregations.  The request was granted and the date of the union was 5th May 1931.  Kingarth Church again fell into disrepair following the severe gale on 15th January 1968 and never reopened.  From that time, the united Church worshipped exclusively at Kilchattan Bay.  The United Church of Bute continued to worship in the building until it was finally closed, and sold in 2007 for conversion into a dwelling house.

The former church building in Kilchattan Bay dates back to 1895.  It was a symmetrical, plain Gothic style ‘nave-and-aisles’ church, with five bay sides and having the gable front facing north-east.  It is constructed of squared and snecked tooled red sandstone, with red ashlar dressings.  There is a raised plinth and stepped architraves stringcourse to the gable front, which has a stiffly geometrical eight-leaf wheel window.  There is an eccentric open-gable belfry with louvres in the apex and vesicles in the flanks.