Craigmore St Brendan’s was built to meet the needs of the members of the ‘Auld Kirk’, resident or holidaying in the Craigmore area, who until then had the inconvenience of having to walk to worship in Rothesay Parish Church (which became the High Kirk) – Trinity Church being a ‘Disruption Free Kirk’.  The architect was David a Crombie of Edinburgh.  Land was bought by Rothesay parish Church, the foundation stone was laid in January 1889 and less than a year later on the 22nd December 1889, the inaugural service took place.  Craigmore St Brendan’s initially became a Chapel of ease, an extension of Rothesay Parish Church, but by 1902 had become a Parish Church in its own right.  In 1957 the congregation linked with Ascog Church. 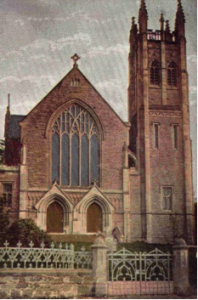 On the 19th September 1973 disaster struck when the building was engulfed by fire, destroying or damaging virtually everything except the tower.  Following much effort and fundraising to ensure a restored place of worship, Miss Margaret Brodie, architect, was engaged to prepare plans, and the new building was dedicated on the 1st October 1975.  The new Craigmore St Brendan’s was, both within and without, in stark contrast  to its predecessor, and to the tower which still dominated it. 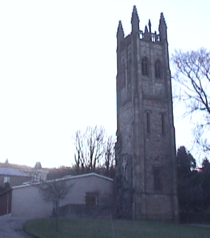 The modern building and the Gothic Perpendicular Belfry have been demolished and the site used for housing.  A Roman Cross which in 1964 was erected on the rear wall of Craigmore St Brendan’s old building, above the organ screen, was restored and then hung on the north-east side of the tower.  It is now on the outside north-facing wall of the United Church of Bute building.  A textile wall hanging created for Craigmore St Brendan’s by Miss Anna McCann and made by Bute Fabrics Ltd, previously hung on the rear wall of the sanctuary.  This abstract representation of the Parable of the Sower now hangs on the wall of the Church Centre building adjacent to the United Church of Bute.