The sanctuary with pitch pine dado, now runs east to west, with painted Corinthian columns supporting a U-plan timber panelled gallery.  At the west end there is a stair to a raised half-octagonal oak pulpit, comprising arcaded base, decorative timber panelling and pilastered divisions, with corniced timber backdrop and flanked by polygonal organ casings, and stained glass windows.  A 2-tiered copper chandelier (circa 1800), believed to be of Dutch origin, is centred beneath a foliate ceiling rose.

There are eight stained glass windows in the Sanctuary.  At the west end, above the pulpit, the risen Christ at the centre of radiating blues, appearing to the three Marys, by Stephen Adam Studios, Glasgow in 1917.  This window was gifted to the Church by way of a legacy from Miss Elizabeth Mitchell, a Sunday School teacher for over 50 years. 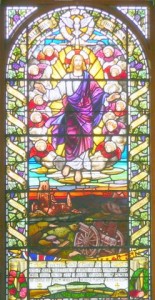 To the left of the pulpit are superimposed memorials to the fallen of World War I, the upper showing a purple-robed Christ as the Prince of peace over a dark battlefield cannon, tank and ruined church.  The lower window bears a scroll with the names of those killed, supported by two seraphs.  These two windows were commissioned by the Kirk Session of the former High Kirk and were paid for by subscription.  They were designed by Alexander walker and executed by Stephen Adam Studios and were dedicated in 1920. 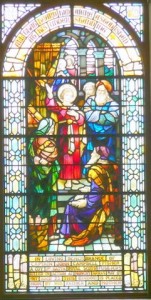 The upper window to the right of the chancel depicts the young Jesus in the temple and was gifted in memory of Captain Ian Campbell Fisher of Orlington, Ardbeg, killed in action on 6th May 1917.

The lower window situated below the gallery is a memorial to World War II.  Although bright and colourful it is without the lustrous depth of its neighbours.  This depicts Christ washing the feet of his disciples.

On the south side of the Sanctuary, there is a window busy with depictions of women variously at work, with the central scene of Mary listening intently to Jesus while her sister prepares a meal.  This window is probably also by Stephen Adam Studios.  It was gifted by the Woman’s Guild to commemorate 54 members of the Guild and their dedication to the work of the Church organisations.

Rainbow Glass of Prestwick completed restoration work on these stained glass windows in 2009, thus ensuring their conservation for many decades to come. 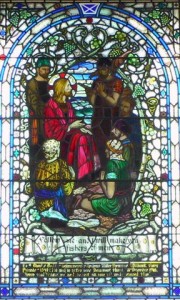 What was originally a single stained glass window in Ascog Church, made by Messrs Stephen Adam in memory of Andrew Ferguson killed in the First World War, was split into two sections, reconfigured by Rainbow Glass and moved to this building in 2009.  The two sections are now backlit on either side of the door at ground-floor level on the north elevation.  The theme of the right hand window is that only by dying (the seed) can bring forth fruit; the left hand window (seen here) depicts Christ calling the first disciples to be fishers of men.

The Church is situated within a graveyard which also contains St Mary’s Church, the early 18th century Bute Mausoleum and several graves of interest, including a relative of Napoleon Bonaparte, Bishop Robert Wallace, Robert Thom, and Principal James Dewar of Marshall College, Aberdeen.

A new Church Centre, including hall and office accommodation, connected to the north side of the existing building was completed in 2009. 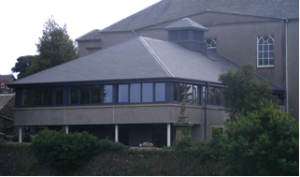